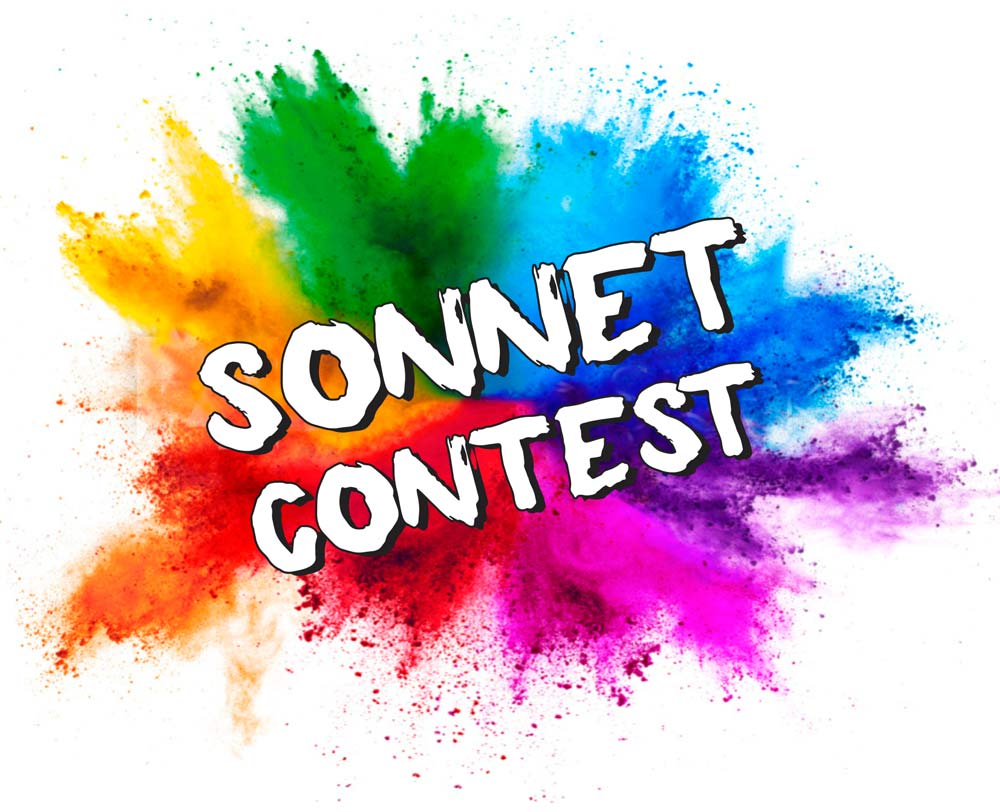 Begun in 2014, the Southern Shakespeare Company Sonnet Contest has grown every year, with submissions received from all around the country. The contest features categories for middle school, high school, and adult poets, with prizes awarded for the top sonnets in each category.

Five hundred-odd years later, thanks to 14th century Italian humanist Francesco Petrarca, the Sonnet form we recognize as ”Shakespearean,” emerges in England. And for the vast majority of the Bard’s 160 stunning examples, each poem’s form is as follows:

Provided submissions hew (basically) to the poetic form above, the words are up to each contestant!

Though sonnet structure is centuries old, our intention with this contest is that the form inspires highly  contemporary expression in our contestants. Now for a quick bit of Q & A to guide your creative process:

Poets love rhythm. And though known principally for his plays, at his core, Shakespeare was a poet. And poets are keenly aware that though imagined content can suggest linguistic forms, it works the other way too: form can suggest content.

A Sonnet, like a Haiku, is a defined structure, necessitating that poets, like Shakespeare (and you!), take imaginative leaps to make all the word choices fit.

Iambic Pentameter then, is the name given to the rhythm that Shakespeare most often used in his works. Similar to a rhythm a musician might use when composing a song, the rhythm of a single ‘iamb’ is that of a heartbeat: “De-Dum.”

Within his bending sickle’s compass come

What’s the rhyme scheme for a Sonnet?

A Let me not to the marriage of true minds

B Admit impediments. Love is not love

A Which alters when it alteration finds,

B Or bends with the remover to remove.

C O no! it is an ever-fixed mark

D That looks on tempests and is never shaken;

C It is the star to every wand’ring bark,

D Whose worth’s unknown, although his height be taken.

E Love’s not Time’s fool, though rosy lips and cheeks

E Love alters not with his brief hours and weeks,

F But bears it out even to the edge of doom.

G If this be error and upon me prov’d,

G I never writ, nor no man ever lov’d.

Often, at the end of the third quatrain occurs the volta or Poetic Turn, where the mood of the Sonnet shifts, and the poet expresses a turn of thought, in the above case:

But bears it out even to the edge of doom.

As you compose your sonnets for this competition, please see the Sonnet’s form as a creative catalyst. The tight, poetic structure is intended to compel your deepest word skills and yield images and themes previously unimagined. Fare the well and thank you for your participation!

Slender arms draped in ornaments of glass;
Frozen bark intertwined with streaks of black.
A crimson songbird calls the time to pass;
The gnarled and crooked branch snaps with a crack.

A hundred thousand tiny stars of white
Tumbling from heaven, settling in the eaves;
Diamonds in the headlights, blinding the night,
Powder the streets, the rocks, the plants and trees.

Pearly sheets of ice coat the silent world;
A marriage of alabaster and blue.
The countless spun sugar clouds are unfurled
Filling the background of the snowy view.

The Influencer by Dean Gessie

and she knew when to friend or tag or ghost,
when to tell sterling stories to engage,
when to bump a placement or boost a post,
when to brand woolly flanks with love or rage

and she would Airbrush teeth in selfie light
or Facetune pixilated brows and lips
or Instagram face color day and night
or PicMonkey skinnier thighs and hips;

but Red blood in the tub no joy brought her
nor like-minded sheep like-led to slaughter.

My satin dress seems not too rare at first,
And button eyes can’t see too far ahead.
The sewing on my mouth has come reversed.
This pink that’s on my shoes was firstly red.

I have some patches mended on my dress
And cannot find my old vermilion hat.
My balding scalp is in severe distress,
With ginger hair clawed out by anxious cats

With fabric skin so moldy, though it’s thick;
Four blotches make a circle ‘round my neck.
My belly button has a darker nick –
Contrasting as a tiny tawny fleck.

I am a doll who’s lying on a shelf
For decades lonely, waiting by myself.

Sometimes I feel like I do not belong.
My heart is home, my mind is on the road.
The demons in my mind string me along,
afraid to turn back, afraid to unload.

At this young age it should not be this hard
to cope alone when torments are too much.
We felt that it was safe to drop our guard,
and now we’re trapped within darkness’s clutch.

We opened up and yet you minimized,
dismissed our nightmares, pushed away despair.
I’m not too young to feel. Don’t trivialize.
All we asked was for someone to be there.

We’re alone in the dark, no hand to hold.
By ourselves we lie as the dark grows cold.

Work, eat, sleep, repeat—thus is life complete;
This hymn in us society instills,
Prescribing our future so nice and neat.
A mindless robot’s life as much fulfills.

We career through our pre-trodden life path,
Go through the motions, society’s stress—
Then find our soul’s been lost, we do the math,
Misplaced somewhere on the road to “success.”

But, I, alone quit comfort, set about,
Trod ten thousand miles on unbeaten earth.
From the Himalayas’ summit looked out,
And turned my world view upside down in Perth.

I broke free of man’s mantras, sacred wealth;
Only through travel did I find myself.

There are dirty masks in the drain sitting,
and old gloves in the drain, trodden through.
Signs stand tall in lawn ditches, close to admitting
a year all too close to the whole world and you.

We are tired but we must persevere,
There is little to say but much to do.
Get your vaccine and open your weary ears,
we are learning what we all must undo.

There is a new world that awaits us all
but we must put it together ourselves.
From our earth and our hearts, we have been called
to do what our deep universe compels.

We are all here now, a full year and gone:
there is nothing but love to push us on.

Brutal arguments are bound to take place
At the end of the day, we remember
We swim to support each other and race
No arguments take away our splendor

So, is it true he died, and then she came?
Close twin in deeds, with feelings, and for looks.
And blossoming in joy-filled mood, the same
As when he shared philosophy and books.

See here her bitter tears; does she not grieve?
For knowing now the pain her being cost,
How one she held and loved the most must leave.
Oh Yes! She cries, but not for sibling lost.

Forever gone a life and love so deep,
That were he really dead, beyond all pain,
Would hurt her not, but one they wake and sleep;
Against her loss she cannot measure gain.

Can hope persist when happiness has flown?
From he to she, together to alone.

A Bright Light at Our Tunnel’s End Now Shines

“Why should I wear a mask?” so many ask.
A killer question in this toxic Time.
Divisive, thoughtless? Or, a thoughtful task?
Let’s seek sane sense, perhaps in rhythmic rhyme.

How could so many duel and die o’er such?
And foist on all a dim distrust of Truths?
The blame doth lie on those who balk too much,
And fear fair votes cast well from many booths.

The Arc that in due time toward Justice bends,
Reveals the moral Path this bard commends.

Memories of Jim After His Passing

Faded boxing posters run through my mind,
Detroit’s fighters showcased in their glories,
Bouts from eighty years ago I unwind,
As I pick up the threads of your stories.

No more tales of Joe Louis and violence
That lasts for rounds or obscure Tigers teams.
I drink at our old table in silence,
Memories of our talks distant as dreams.

Coolidge in the White House when you were born,
The time of our time passed in your twilight.
Now you are gone and I am left to mourn.
As my mid-afternoon turns into night.

The crowd comes as I sit by the ringside,
“I worked in his corner,” I claim with pride.